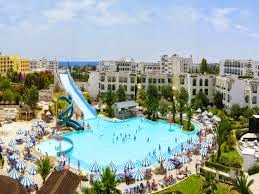 One of the most difficult things is to provide advices to the tourists loving to explore new destinations for summer vacation. But when it comes to Tunisia, the task will be easier; They can say with great confidence that this country deserves to be a tourist destination and summer occasion. It offers golden opportunities for many types of tourism, making it one of the most attractive to the Arab countries, where tourists annually visited by more than five million tourists, or the equivalent of half the estimated population of about ten million people.
Perhaps one of the most important types of tourism offered by Tunisia for tourists in the summer; tourism recreation for those interested in quiet and away from the hustle and bustle of life, and tourism relax for those wishing to get rid of the fatigue of work and pressure, and cultural tourism for those interested in a fun intellectual recognize the history, archeology and traditional industries, or all those types and the other for those wishing to combine them.
And provide Tunisia these types of tourism in the framework blends originality and sophistication, to allow it to tourists inhaling the scent of history that oozes from the historic landmarks represented in the ancient cities that have kept them in the heart of major cities big and enjoy at the same time as provided by modern tourism facilities and tourism services high .
The fact that the confusion could haunt tourists when multiple options are varied, but we see anyway to go to Tunis and then to Bizerte, and bathrooms, and Sousse; may be enough to say that tourists spent an enjoyable vacation sense of the word. 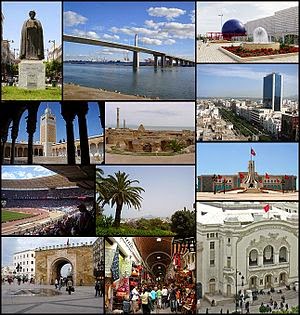 Despite being the center of political and economic Tunisia's first tourist city, Tunis the capital is also the first, as it combines the originality and sophistication, like other major cities in Tunisia.
The authenticity is represented in several of the most important aspects of retaining in the middle of the old city within the World Heritage listed what Tdmh religious and historical landmarks, estimated at more than seven hundred teachers. Featuring the city's ancient mosques of old such as Zitouna Mosque and the Kasbah Mosque and the Mosque of Youssef Dey Mosque Hammouda Pasha, and its role such as Dar Ben Abdallah and Dar Hussein, Dar es Alosrm, as characterized Bozktha winding souks traditional, which includes varieties are endless manufactures traditional can smell the tourists where fragrant history.
A highlight what they offer traditional markets to Tunis a very wide variety of authentic artefacts such as carpets made ​​minutes (rugs) Kairouanese and porcelain and pottery products and manufactures copper and engraved and inlaid kinds of ornaments and jewelry and fashion Tunisian national. The originality as exhibits in the Bardo Museum, which includes important collections of mosaics unique in the whole world.
The evolution in Tunis can watch features a few meters away from the old city, and specifically in Bourguiba Avenue, which seems as one of the central streets of Paris, including its inclusion in the flanks of shops, libraries, and high-end hotels such as Hotel Africa and the Hotel Hana International, two of the five-star hotels, and including running docks of cafes that tourists can spend the morning and afternoon sessions and night sessions resemble Parisian cafes, where enjoying the various types of refreshments and drinks Tunisian.
As you can see the landmarks that development on the banks of the lake (Lake of Tunis), which had a Saudi businessman Saleh Kamel played a major role in the reclaimed area and make it suitable for hiking and Urbanism. This lake, which stretches from the center of the capital until the port on the Gulf of Tunis Tunisia, you can see the breadth of hotel balconies Abu Nawas Tunis famous five-star near the center of the capital.
And just a few kilometers from the banks of the lake, the spread of modern buildings, which uses many of the top roles as offices and homes while using their roles floor commercial outlets such as bars, cafés and restaurants.
The tourists can spend times and his family in this beautiful cafes and restaurants enjoying their eyes the beauty of the lake and the calm waters and the breeze blowing ailing them, especially in times of waterless and evenings and nights. It milestones which are worth seeing in Tunis Belvédère green garden that contains a large garden for the animal includes a wide variety of animals, birds and reptiles of the world, and that tourists can spend the day having fun.

The charming shores of Carthage 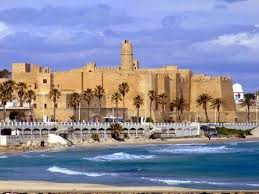 The most important milestones in Tunis in the north-eastern suburbs have, and specifically in the charming shores of Carthage, which extends about 25 kilometers on the Gulf of Tunis. In the areas of Carthage, Sidi Bou Said, the marina, and Gammarth, enjoy many tourist places in nature witch-infested modern hotel facilities of a first-class, which includes restaurants, cafes, sports facilities and physical health, which exists only in the most prestigious tourist country in the world. This allows the places and facilities for tourists spend the most enjoyable times either walk the beaches to hiking, as in the marina area, and either sitting to spend fun times in one of the cafes or restaurants scattered in various parts of these beaches.
It is the most important thing to watch for tourists in the region, the village of Sidi Bou Said, which is the first protected site in the world. It is located at the top of a cliff overlooking the Gulf of Tunis and Carthage. This is the village of the most important areas to attract tourists to Tunisia. The establishment of this village dates back to the Middle Ages, and characterized to homes covered with lime and white mashrabiyya and windows and wooden doors busy blue, roads and alleys paved with stones. Besides there are many cafes, restaurants and shops of traditional industries and antiques and some small hotels.
And areas that attract tourists in the shores of Carthage, Gammarth area known Bhilltha overlooking the coast with breathtaking beauty. The area includes many of the most famous star hotels such as the Golden Tulip Hotel and the Hotel Le Palace Hotel and Renaissance Hotel Abu Nawas in "Gammarth. 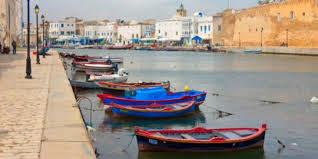 Bizerte is called "Venice of Africa" in analogy with the Italian city of Venice, and can be reached in less than an hour north-west of Tunis. This is a city on the Mediterranean, and which bore the name "Bizerte" after the Arab-Islamic conquests, from the historic cities of Tunisia, which has taken the colonial French military base and the port of him since he entered Tunisia in 1881. And France tried to maintain its survival in the city of Bizerte, Tunisia after independence in her March 20, 1956 AD, which was born with the Tunisian armed conflict in 1961 ended up accepting the French army to evacuate the city on October 15, 1963 AD.
And enjoy the beauty of Bizerte beside the sea wild beauty breathtaking goal in the pine forest in the town of sand stretching up to the sand dunes on the edge of the sea, and in the protected garden "Ichkeul" National, which is the only natural site in the world protected by three international conventions for the protection of nature. It consists of a group protected marshes and lake area of ​​12,600 hectares, and enjoy the natural beauty.
The availability of Bizerte tourist infrastructure of approximately 3 thousand beds. The city marina to accommodate 120 boats, a desirable place for owners of boats Entertainment 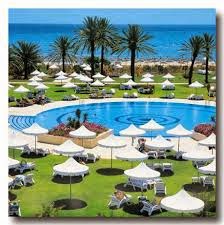 The city of Hammamet after almost an hour's drive to the south-east of Tunis. And enjoy the beautiful sandy beaches quiet over several kilometers. And tourists can enjoy orange plantations, which is famous for its city, and spend wonderful times to sit in restaurants and cafes spa town located in the old city adjacent to the beach, sea and shopping in the traditional market located inside the fence.
The tourists can go to the beaches to charming spa town named after the South Yasmine Hammamet for swimming or water skiing or riding a parachute, or even wander around the city on tourist vehicles.
Yasmine Hammamet and includes a large group of the largest hotels and the best design, such as Asdrubal Tlasa Hotel and Hotel Al Muhairi and Moradi Hotel Melia hotels for Abia and Hotel Africana. There are also some of the city's recreational areas such as Africa garden, which includes a wide variety of animals. 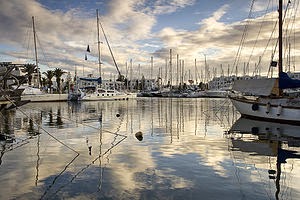 Sousse, called by Tunisians the gem of tunisian tourism, is located on the two-hour drive to the south-east of Tunis, about hours drive to the south-east of the baths. The city of Sousse, Tunisia's third largest city after Tunis and Sfax, and historical sources say that they founded by the Phoenicians three thousand years cheerfully by name Hadramout, which later changed to Sousse. Since its founding by the Phoenicians on the rule of succession Sousse Romans, Vandals, Byzantines and Arabs, Muslims. The ruling came during the Arab-Muslim occupation of Normandy and then the Spanish, then the French to be edited them in 1943.
The advantage of the city of Sousse olive groves that surround them on every side, covering large areas of up to more than a quarter of a million hectares. It is the tourist perspective, the most important thing should be seen in the ancient city of Sousse, which has maintained many of its features, thanks to the attention of the Tunisian authorities. One of those monuments tower overlooking the boy behind the trachea, which rises 30 meters and tourists can enjoy him to an overview of the city. As well as Rabat, which is a fort built in the era of state stationed, and the Grand Mosque which was built by Prince Aghlabi year 850 AD, and the museum which houses an important collection of mosaics.
As well as of the most important tourist attractions that any tourist can not be ignored for Sousse, Port El Kantaoui, which is thought of as a way in which Tunisians innovative Tunisian Tourism in about 1973 y 1974. The first of the port in 1979 as a concept in a new tourist port Tunisia is the concept of entertainment, which has become a major tourist attraction point.
The basin includes the port area of ​​four hectares can accommodate more than three hundred yacht, and a playground for the global golf 36 holes, occupies an area of ​​130 hectares, stretching from the coast to the foot of the hills overlooking the harbor.
It also includes real estate projects such as port Diyar Sea, which consists of 851 apartments and 78 commercial shops, the homes and gardens legislator which contains 214 apartments and 40 shops, and parking to accommodate about 800 cars. And attracts Kantaoui about two million tourists annually enjoy roam the docks, shopping in its stores and eating in its restaurants and drinks in cafes and the practice of maritime activities in waters like riding submarines roaming in speed boats and water skiing, Mamadan so times can be one of the most beautiful tourist can be spent in any tourist spot in the world.